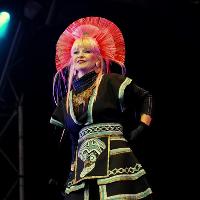 Fronting a band known as Toyah, her singing career was slow to take off and the band released six singles in the UK before finally hitting the charts in 1981, with "It's a Mystery." This was followed by several other huge hits including "Thunder In The Mountains" and "I Want to Be Free." These singles were also successful on an international level. In the early eighties, Toyah also had her own successful make-up range called 'Soul Searches'.

In 1982, she was voted Best Female Singer at the British Rock and Pop Awards — since restyled as The BRIT Awards, or "BRITs" — and in 1986 she married UK guitarist Robert Fripp. She was one of the first acts to score regularly in the UK Singles Chart with EPs. Also in 1986, Willcox sang lead on the Tony Banks track "Lion of Symmetry." In 1987 she made the top fifty with her version of "Echo Beach."

Toyah has released 30 albums (both as a solo artist, and part of groups), 22 of which have been studio albums, 7 of which have been UK Top 40 successes. She has 13 UK top 40 singles, making her one of the most successful female artists in British history. Read more on Last.fm. User-contributed text is available under the Creative Commons By-SA License; additional terms may apply.

Toyah Wilcox has been mentioned in our news coverage

Below is a sample playlists for Toyah Wilcox taken from spotify.

Do you promote/manage Toyah Wilcox? Login to our free Promotion Centre to update these details.