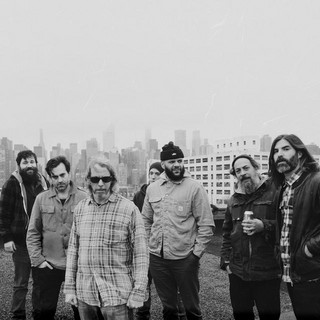 The Budos Band are an "Instrumental Staten-Island Afro-Soul" outfit recording on the Daptone Records label. The band has eleven members (up to thirteen members at times) who play instrumental music that is self-described as "Afro-Soul," a term and sound which - in a recent interview - baritone saxophone player Jared Tankel elucidates as, being drawn from Ethiopian music the band had been listening to that had a soul undercurrent to it, which the band then "sprinkled a little bit of sweet 60's stuff on top" of.

The core of the band met as youths while all participating in an after school jazz ensemble at the Richmond Ave. Community Center, in Staten Island, New York. It wasnâ€™t long before their common hunger for the rougher stripped down sounds of Soul Music brought them together for late night ferry rides into Manhattan, where they would sneak in the back door of the No Moore Club downtown to hear bands like Antibalas, the Sugarman Three, and Sharon Jones and the Dap-Kings. It was there, in that basement hothouse packed with the only the hippest James Brown fanatics and Fela Kuti disciples, where the kernels of instrumental Afro-Soul were first sown into the fertile minds of these talented young men. Kernels which would later germinate and grow into the roots of their strong unique sound. After meeting resistance from the band director about the direction they were trying to take the music, they left the Community Center to form Los Barbudos, (spanish for â€œthe bearded onesâ€) a name which was 2005 trimmed to The Budos Band after one of the boys shaved. With the recruitment of a few horn players from the neighboring borough of Brooklyn, the band began to practice regularly, exploring the outer cosmic boundaries of afro-beat and soul music from the safety of their tiny concrete rehearsal space on Sand St. As they learned and grew together, their music matured, expanding and settling into a groove as deep and as broad as the Hudson Bay itself. By the time they had arranged a chance to play for a Daptone A&R man, their sound had hardened to a diamond. They were signed on the spot and scheduled to go into the studio immediately for a recording session where they would proceed to cut a full length album in the better part of three nights.

Deep funk, Afro-beat, Ethio-jazz and soul influences can be heard in the Budos Band albums, both of which are Daptone Records releases recorded at the label's own studio, Daptone's House of Soul, in Bushwick, Brooklyn. Numerous other funk and soul outfits appear on the same label including: The Mighty Imperials, Sugarman 3, Sharon Jones & The Dap-Kings, plus others.

Most of the following musicians appear on both studio albums:

The Budos Band has been mentioned in our news coverage

Below is a sample playlists for The Budos Band taken from spotify.

Do you promote/manage The Budos Band? Login to our free Promotion Centre to update these details.