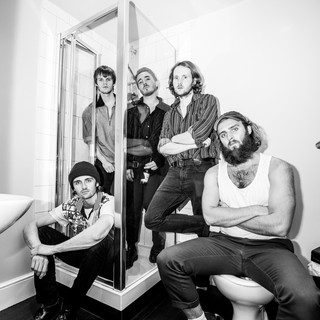 Sheffield five-piece, SHEAFS formed at the end of 2015 and released their debut EP, ‘Nobody's Watching’ in November 2016. Described as "Menacing, accomplished and full of confidence" by respected champion of new music; Little Indie Blogs, it was played on BBC 6 Music and BBC Introducing Sheffield. Steve Lamacq also made SHEAFS featured artist on his Music Recommends show.

Despite being new, and completely DIY, their spiky, newer wave sound, hard work and flourishing live reputation, are propelling the band forwards at an astounding rate.

Already, SHEAFS have supported Pretty Vicious, Idles and The Vryll Society, beat over 400 other bands to win the Virgin FreshFest competion, performed live on Edith Bowman’s breakfast show, find themselves in the last 120 bands of Glastonbury’s 2017’s emerging talent competition, and huge tune, ‘Nobody’s Watching’ is residing on Virgin Radio evening playlist. In short, SHEAFS have earned the right to serious attention.

This is a band that the music world will be hearing a lot more about.

Sheafs has been mentioned in our news coverage

Grab This Feeling Big in 2018 tickets

Watch performances from This Feeling 'Alive' tour warm up show

Below is a sample playlists for Sheafs taken from spotify.

Do you promote/manage Sheafs? Login to our free Promotion Centre to update these details.