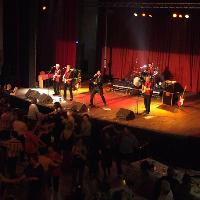 Reelin âNâ Rockin, is a band with a lot of experience, the line-up is;

Front man & Lead vocals; Steve Turner. Steve has been a singer for many years and recently returned home from Malta where he sang professionally as a solo act. Whilst the youngest in the band his music roots lie firmly in Rock n Roll (a big Shakin Stevens fan). He works the audience well and will have you singing along by the end of the evening.

Lead Guitar; Bob De-Banke. Bob is an excellent Lead guitarist, also provides backing vocals & an occasional solo. Bob was a former member of "COAST to COAST" who had a hit with "Do the Huckle-Buck" in the early 70's, this is sometimes included in the bands set lists. Bob went on to be a formidable guitarist in "Johnny and the Jailbirds".

Reelin n Rockin has been mentioned in our news coverage

Do you promote/manage Reelin n Rockin? Login to our free Promotion Centre to update these details.