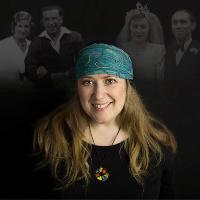 Having won the Best Comedy Show award in the Greater Manchester Fringe and full to bursting rooms for more than 80% of her run at the Edinburgh Fringe, Rachel Creeger's show is on a UK tour!

With a face that shouts "Xmas" but a soul that screams "Hanukkah", Rachel Creeger has always felt like she has a foot in two worlds. Coming from a family of immigrants and refugees who felt totally British regardless of accents and lifestyle has coloured her perception of what it means to be part of a community. Sheâs lived in Essex, Israel and Belarus. She's been a dental nurse, a singer and social worker. Now she performs, writes and directs comedy. Is it any wonder she has no idea where she truly belongs?

A debut solo stand up comedy show from the writer of "An Insomniac's Guide To Ambulances" exploring the drive to fit in, with a bit about being a pop star.

Rachel Creeger hasn't been mentioned in our news coverage

Do you promote/manage Rachel Creeger? Login to our free Promotion Centre to update these details.