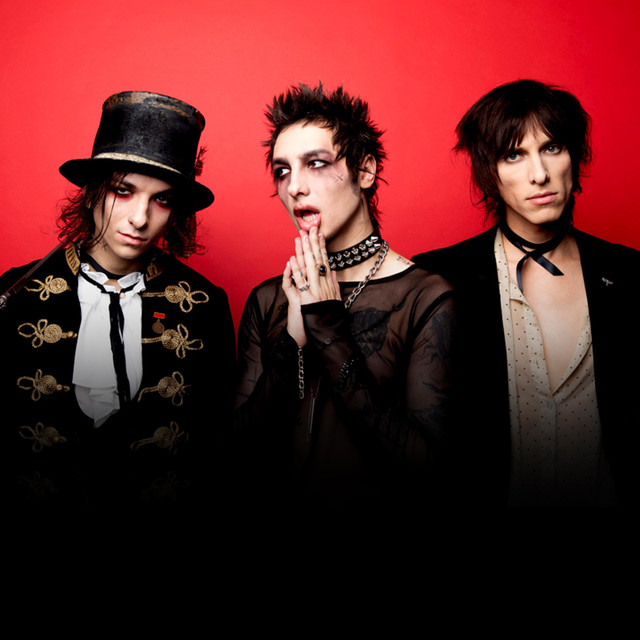 The fashion-art rock band Palaye consisting of Remington Leith, Sebastian Danzig, Emerson Barrett has been named champions of MTV's "Musical March Madness" 2014. They are the first unsigned act ever to compete in and win this fan-voted tournament. The global Samsung Galaxy Note commercial that features Palaye Royale's single "Get Higher" continues to make an impression and make history.

Songwriters, performers, rockstars, co-producers, filmmakers, champions. Years ahead of their time, frontman Remington Leith, guitarist and organist Sebastian Danzig and drummer Emerson Barrett formed Palaye Royale in late 2011 and are now champions of MTV's "Musical March Madness," now in its fifth year. The history-making band is the first unsigned act ever to be fan-voted to compete in the NCAA-style music competition, pitting 64 bands against one another that ultimately saw Palaye Royale defeating Linkin Park in the championships. Palaye Royale can now call themselves victors beating out several major acts in the process including Vampire Weekend, Coldplay, Bastille, Tokio Hotel, We Are The In Crowd and finally Linkin Park.

A winning mentality has always been top-of-mind for the guys, whose last several months have been a whirlwind. Samsung Galaxy Note hand-picked Palaye Royale's "Get Higher" for a commercial that aired globally on digital billboards in London's Piccadilly Circus, Madrid, Spain and Singapore's Orchard Road in December 2013 - once again making history - as the first-ever unsigned act integrated into Samsung branding. In the illustrated and interactive ad spot, the trio's recent hit, the infectious retro "Get Higher" is the focal point with all members of Palaye Royale using Samsung products in their everyday routine - checking their Samsung watch for their tour schedule, drawing on the Note tablet, playing video and even walking down the legendary Abbey Road with devices in hand. Nearly closing in on 1 Million views on YouTube, the music video for "Get Higher" is quickly catching on with fans and brands as a favorite.

Palaye Royale hasn't been mentioned in our news coverage

Here are the latest Palaye Royale mixes uploaded to Soundcloud.

Do you promote/manage Palaye Royale? Login to our free Promotion Centre to update these details.