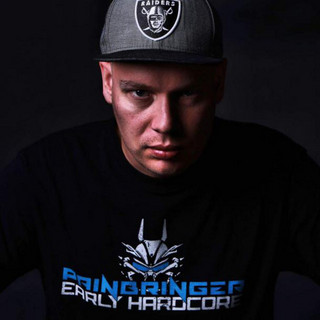 Painbringer(also known as Lammert Brouwer) has always been a big music fan. In the early 90's he grew up with the infamous gabber/hardcore sound. For years he followed the scene. Listening mostly to artists like Tellurian, Ruffneck, Predator, Omar Santana, Lenny Dee and others. He developed a weak spot for the more advanced hardcore-sound with breakbeats, rough melodies and screaming acid.

The love for this sound was one of the main reasons to produce his own core after the last millenium using his alter-ego. His main style can be described as hardcore mixed with goa-trance/acid influences, a heavy drum'n bass sound with an oldschool touch.

Painbringer is also an active DJ preformer and can transform the dancefloor into a dancing inferno! Read more on Last.fm. User-contributed text is available under the Creative Commons By-SA License; additional terms may apply.

Painbringer hasn't been mentioned in our news coverage

Here are the latest Painbringer mixes uploaded to Soundcloud.

Do you promote/manage Painbringer? Login to our free Promotion Centre to update these details.