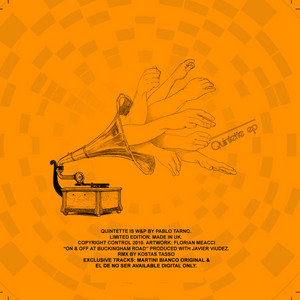 Pablo Tarno is a DJ and producer based in Berlin and co-owner of the acclaimed record label Finest Hour Records (co-founded with Onirik), which focuses on stripped-down underground house music and aims to release his own compositions as well as those of respected artists and friends in his entourage.

An enigmatic tastemaker in the electronic music landscape, his DJ sets are driven by sharp musical knowledge and eloquent skills behind the decks, while being heavily influenced by Chicago/Detroit house, hip-hop, jazz and minimalist dub techno.

Without compromising the quality of his craft or his musical output, throughout the years Pablo has been steadily carving his path, earning regular spots at clubs and events in the likes of Berlin’s Club der Visionäre and Tresor, Brussels’ Fuse or Ministerium Club in Lisbon, to name a few. He’s also just about to hit South America

for his second tour in the continent.

After his widely praised FH:05 and FH:09 releases, this year he dropped a couple of remixes on Käse Kool and Open Recordings, while his new 12” will be out in April on Ministerium Records (incl. Audio Werner Remix). Furthermore, a newly signed EP is forthcoming on Taverna Tracks at the end of Spring.

Pablo Tarno hasn't been mentioned in our news coverage

Here are the latest Pablo Tarno mixes uploaded to Soundcloud.

Do you promote/manage Pablo Tarno? Login to our free Promotion Centre to update these details.