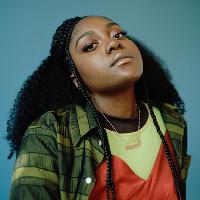 Fatimah Warner, better known by her stage name Noname (fka Noname Gypsy), is an American hip hop recording artist and poet from the Bronzeville neighborhood of Chicago, Illinois. She has been rapping and performing slam poetry in Chicago since 2010. In 2013 she gained wider recognition following her appearance on the track "Lost" from Chance the Rapper's mixtape Acid Rap. Noname is currently finishing work on her debut mixtape Telefone. Read more on Last.fm. User-contributed text is available under the Creative Commons By-SA License; additional terms may apply.

Noname has been mentioned in our news coverage

Five Of The Best acts at Wireless festival 2017

Here are the latest Noname mixes uploaded to Soundcloud.

Do you promote/manage Noname? Login to our free Promotion Centre to update these details.