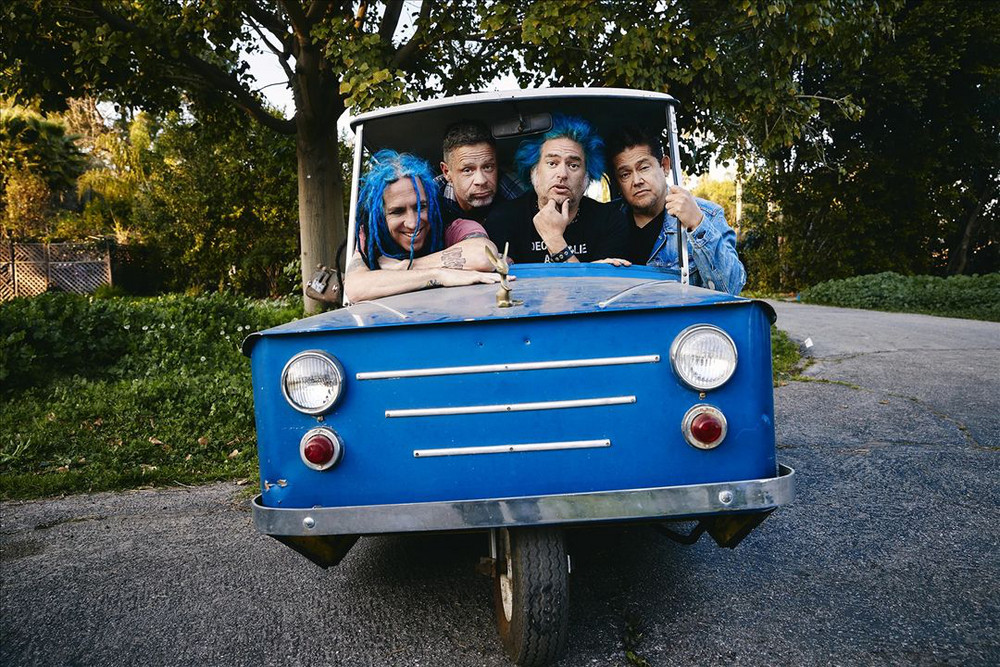 NOFX is a punk rock band from San Francisco, California, United States, formed in 1983. The original lineup included singer/bassist Fat Mike, drummer Erik Sandin, and guitarist Eric Melvin. Since 1991, the lineup has remained the same, with El Hefe playing guitar and trumpet. They have released 11 full-length studio albums, 15 EPs, 2 live albums, and many 7" singles. The group has sold over 6 million records worldwide, making them one of the most successful independent acts of all time. The band's sound is diverse, utilizing elements of skate punk, hardcore punk, reggae, and other music genres. Their lyrics generally satirize issues such as politics, society, various subcultures, racism, the music industry, and religion, often using a large amount of comedy. NOFX's first recording was a demo from 1983, produced by The Germs drummer Don Bolles, which did not sell any copies. They released their self-titled debut EP on Mystic Records in 1985, which was later re-released in 1992 as part of the Maximum RocknRoll CD. For a year, Erik Sandin left the band and was replaced by Scott Sellers, then Scott Aldahl. Dave Allen was in the band for about four months, until he died in a car accident. In 1986, the band released So What if We're on Mystic!. Dave Casillas joined the band on second guitar in 1987 and was featured on the EP The P.M.R.C. Can Suck on This!, attacking the PMRC's call for censorship of music. The original cover was an edited S&M photo, but the re-released version was changed to a photo of Eric Melvin. Eric Sandin returned and they recorded Liberal Animation in 1988 (before Dave was replaced by Steve) with Brett Gurewitz of Bad Religion. Although the title and some lyrics mocked vegetarianism and animal rights, Fat Mike says that he became a vegetarian after he wrote Liberal Animation. 'If a big enough animal had a chance it would eat you up!' The album was re-released in 1991 on Gurewitz's label Epitaph. Dave then left the band and was replaced by Steve Kidwiller. NOFX had signed to Epitaph by 1989, releasing their second album, titled S&M Airlines. 1990 saw the release of Ribbed. By 1991, Aaron Abeyta (aka El Hefe), joined to round out the group. White Trash, Two Heebs and a Beanwas released in 1992, which originally had the title White Trash, Two Kikes, and a Spic. The original title was changed because Eric Melvin's grandmother was upset about the racial epithets. It was not until the 1994 release of Punk in Drublic that the band had a commercial breakthrough, with the album going gold. In the same year, pop punk entered the mainstream with the success of The Offspring's Smash and Green Day's Dookie. In 1996 they released Heavy Petting Zoo, which wasn't very popular among its fans because it showed a different sound in some tracks. Their 1997 record So Long and Thanks for All the Shoes was faster, with more ska and reggae, and was well received by the public, although its title shocked everybody because it seemed as it was going to be their last album. They soon stated it wasn't true. In 1999, the band released The Decline, a fiery and pessimistic social commentary. Having a duration of 18 minutes and 23 seconds, it is nearly the longest punk song to date, second only to "Yes Sir, I Will" by Crass, which spans more than 22 minutes. The coming of a new century marked the end of NOFX in Epitaph Records. In 2000 they released Pump Up the Valuum, which in many people's opinion is a good record but still is missing something. In 2003, NOFX released War on Errorism, and launched their anti-George W. Bush campaign. Fat Mike organized the website Punkvoter.com, compiled two chart-topping Rock Against Bush compilations, and kicked off a Rock Against Bush United States tour. The band has released many EPs (i.e. Fuck the Kids, The Longest Line) on Fat Mike's own label Fat Wreck Chords. In February 2005, they launched the NOFX 7" of the Month Club, a subscription-based service which saw the release of one new EP almost monthly, from February 2005 to March 2006 (a total of 12 releases). The cover art for these EPs were chosen from fan-submitted entries. The first 3000 subscribers to the club received all of their records on colored vinyl. Fat Wreck Chords later released full sets of the EPs. On March 14, 2006, an EP entitled Never Trust a Hippy was released. The EP was followed on April 18 by the album Wolves in Wolves' Clothing. On September 12, 2006, the video game EA Sports NHL07 was released, featuring the title track of the latter album on its soundtrack. The band recorded three nights of shows in San Francisco, California for the live album, They've Actually Gotten Worse Live! that was released on November 20, 2007. NOFX aired in 2008 a reality show on Fuse TV called NOFX: Backstage Passport, chronicling their recent worldwide tour full of mishaps and fun stuff. NOFX released their eleventh full length, Coaster, on April 28, 2009. NOFX will release their twelfth full length, Self/Entitled, on September 11th, 2012. Official site: http://nofxofficialwebsite.com User-contributed text is available under the Creative Commons By-SA License and may also be available under the GNU FDL.

NOFX has been mentioned in our news coverage

Below is a sample playlists for NOFX taken from spotify.

Do you promote/manage NOFX? Login to our free Promotion Centre to update these details.