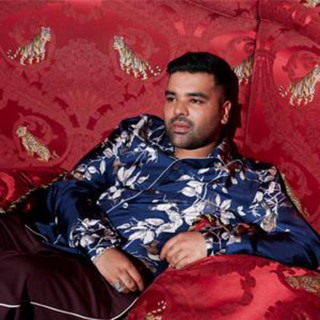 The producer burst on to the music scene in 2009, by co-writing and producing Chipmunk's hit single "Diamond Rings", featuring Emeli Sandé. Khan would once again work with Sandé, this time on Wiley's "Never Be Your Woman" (2010), a cover of White Town's "Your Woman" (1997). Sandé later earned a record deal with Virgin Records, with Khan co-writing/producing her debut album, Our Version of Events. Naughty Boy was formally introduced and credited as an artist on Sandé's second single "Daddy", though he doesn't actually perform on the track.

Khan has also worked with Alesha Dixon, JLS, Lily Allen, Alexandra Burke and Jennifer Hudson. He also produced records for Professor Green, Cheryl Cole and Tinie Tempah. Khan worked with Sandé to produce and co-write Leona Lewis' 2012 comeback single "Trouble" which features Childish Gambino. Khan also wrote and produced "When It Hurts" and "Mountains" for Lewis' album Glassheart; However, "Mountains" was re-recorded by Sandé and put on her own album Our Version of Events. He also worked on records for Rihanna including "Half of Me" (co-produced with StarGate), "Side Effects of You" for Fantasia Burrino and co-produced "Craziest Things" with will.i.am for Cheryl Cole.

Khan also spent time, throughout the development of his career, working on his own debut album titled Hotel Cabana, which is scheduled to be released under his moniker "Naughty Boy" by Virgin EMI Records in 2013.[5] The album's first single "Wonder" features frequent collaborator Sandé on the lead vocals. It was released on 30 September 2012 and also was the leading single from the re-release of Sande's debut album, Our Version of Events, after already appearing on the US version of the album. It peaked at number ten on the UK Singles Chart.

British singer-songwriter Gabrielle also worked with Naughty Boy for Hotel Cabana on a song called "Hollywood", which was initially tipped to be the album's second single, with the album following in February 2013. Gabrielle also revealed that fellow British songwriter Ed Sheeran and British rapper Tinie Tempah will also feature on Hotel Cabana.[14] Both Tempah and Sheeran have worked with Naughty Boy on previous records. It is the album's title song, "Hotel Cabana" which features Tempah. A trailer for Hotel Cabana was premiered on Naughty Boy's VEVO account on 20 September 2012. It states Hotel Cabana is "directed by Naughty Boy, starring Emeli Sande, Tinie Tempah, Professor Green, Gabrielle and George The Poet". Of the album, Khan's opinion of it was "It has a concept to it, so it's more like a film in some respects", claiming "I’m not just a producer – I’m a director too". However, it until May 2013, that the second single "La La La" featuring Sam Smith was released. It reached number one in the UK, three in Ireland and three in Scotland. The album was released on 26 August 2013. It peaked at number two in the UK.

After completing work on his own album, in 2013 Khan resumed production for other artists. He worked on pop records for American singer Britney Spears, as well as joining Spears' sessions with producer William Orbit. British singer Lily Allen also asked Khan to produce records for her upcoming album. Additionally, he teamed up with Sandé and Katy Perry in New York for a song set to appear on Perry's upcoming album, Prism (2013).

Naughty Boy has been mentioned in our news coverage

Here are the latest Naughty Boy mixes uploaded to Soundcloud.

Do you promote/manage Naughty Boy? Login to our free Promotion Centre to update these details.