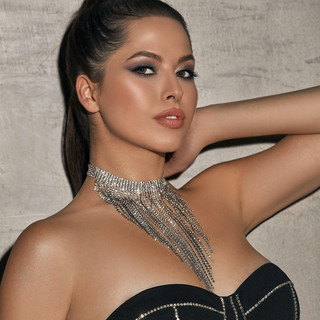 Kateryna Kremko, more known as Miss K8 is an international hardcore DJ and producer from Kiev, Ukraine. She has performed all over Europe as well as America and Australia. Her sets are famous for their raw flavor and a unique drive that has thrilled many dancefloors. Bringing the crowd a combination of energetic mixing and powerful performances, she viciously rocks every party.

The Hardcore Queen from the East has already played on many big festivals like "Defqon 1.", "Masters of Hardcore", "Dominator", "The Qontinent", "Free Festival" and "Outdoor Stereo Festival". Her many performances around all world confirm her fastly growing popularity.

In May 2012, Miss K8 released her first solo release "Unforgettable" on the prestigious Masters Of Hardcore Records, and was an instant success. Kateryna's first collaboration was released in November of 2011 on Masters Of Hardcore Records. Her track "Bloodrush" with dutch hardcore legend Angerfist appeared on the notorious "Retaliate" album, and got massive support by dj's around the globe.

At the end of 2012 she released the powerful "Divide & Conquer" EP with Angerfist, including "Santiago" which hit the #1 at Hardtunes for several weeks and her banging solo track "Liquid8".

With 2013 in sight the Miss K8 success story continues. Upcoming performances in countries as the Netherlands, Australia, United Kingdom, France, Italy, Austria, Spain, Belgium, Sweden are only the beginning of yet another successful year. Read more on Last.fm. User-contributed text is available under the Creative Commons By-SA License; additional terms may apply.

Miss K8 has been mentioned in our news coverage

Things to do in Shoreditch

Below is a sample playlists for Miss K8 taken from spotify.

Do you promote/manage Miss K8? Login to our free Promotion Centre to update these details.