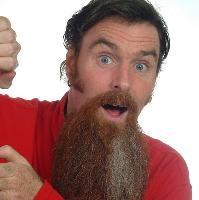 Martin comes from Northern Ireland, and after a successful career as a circus performer, he turned his attention on the unsuspecting comedy circuit.

With almost 30 years experience as a professional performer, Martin has established himself as one of the UK’s most popular and in-demand comedians.

Martin has performed successfully at events of all description; from the Hammersmith Apollo to a show for the inmates of an Italian prison, from comedy clubs to performing before members of the British Royal Family.

Martin has numerous appearances on radio and television.

As well as devising and performing his own BBC television show, he has written jokes for some of the biggest names in British comedy.

Martin Mor has been mentioned in our news coverage

Justin And The Juggler In Heaton Moor!

Do you promote/manage Martin Mor? Login to our free Promotion Centre to update these details.