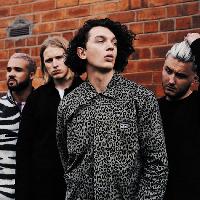 Rip-roaring, energetic Indie-pop with hints of Funk and Blues. In their year and a half as a band, BBC Introducing favourites Larkins have grown from strength to strength with plays on BBC Radio 2 by Dermot O'Leary and twice Radio X's prestigious 'Shock of the new'. They have honed their live performance and have set the Manchester music scene alight with shows getting bigger and bolder including a sell out shows at the prestigious Deaf Institute and Manchesters Club Academy. 2016 include shows at Kendall Calling and Ramsbottom Festival but also the O2 Ritz with The Slow Readers Club and the O2 London with Dr John Cooper Clark. 2017 is set to be even bigger.

"Larkins: the band who could be Manchester's next arena act. The four students and school mates from Glossop are already writing songs that would make Chris Martin weep with envy" Sarah Walters, Manchester Evening News

Larkins has been mentioned in our news coverage

Blackthorn Festival is back in 2018

Here are the latest Larkins mixes uploaded to Soundcloud.

Do you promote/manage Larkins? Login to our free Promotion Centre to update these details.