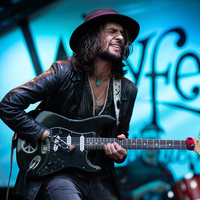 Keith Xander is an incredible musician and human being! His and brother Stu's band 'Xander & the Peace Pirates' are a testament to musical integrity and personal strength. Combining soul, blues and rock, their pervasive blend of inspired song writing and memorable performances has already seen them enrapture audiences from around the world. Keith and Stu were discovered on YouTube by Gibson Brands CEO, Henry Juszkiewicz, and during their subsequent performances for the company at numerous international events, the band caught the attention of not just an ever-growing collective of fans but also industry legends such as Eddie Kramer (Jimi Hendrix, Led Zeppelin, Kiss, the Stones), who was so smitten by their music he offered to produce the band’s first album.2015 saw the band’s revered and exalted status as a live-performance juggernaut evolve even further after concluding their 5-year tenure as the resident band at Liverpool’s iconic Cavern Club; supporting guitar royalty Joe Bonamassa and Joe Satriani at ‘Classic Rocknacht’ in Loreley, playing sold out shows supporting 60's legend Manfred Mann and guitar blues legend Robben Ford across Germany; and finally culminating in being personally invited to support ex-Whitesnake and Blues-guitar Hero Bernie Marsden on his UK tour. With haunting riffs, genius melodies, and an irrepressibly infectious charisma, Xander and the Peace Pirates continue to share their musical passion to standing ovations, while spreading a universal message of peace, love and harmony.

Keith Xander hasn't been mentioned in our news coverage

Here are the latest Keith Xander mixes uploaded to Soundcloud.

Do you promote/manage Keith Xander? Login to our free Promotion Centre to update these details.