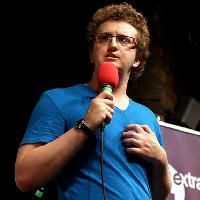 Runner-up in both the Chortle Student Comedy Award and So You Think You're Funny in in 2012; third placed in the Laughing Horse New Act Of The Year competition 2013; and nominated for best newcomer in the 2014 Chortle Awards.

Jonny Pelham hasn't been mentioned in our news coverage

Do you promote/manage Jonny Pelham? Login to our free Promotion Centre to update these details.