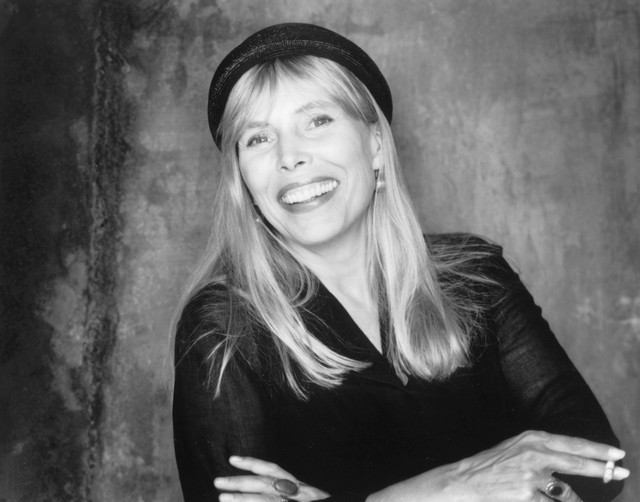 Joni Mitchell, CC, (born Roberta Joan Anderson; 7 November 1943 - Fort Macleod, Alberta, Canada) is a musician, singer-songwriter, poet and painter. Mitchell began singing in small nightclubs in her native Western Canada and then busking on the streets of Toronto. Her writing and art talent emerged before her exposure as a gifted musician performing in Western Canada, including Winnipeg, where she met Neil Young. She then associated with the burgeoning folk music scene of the mid-1960s in New York City. Recording her dÃ©but album in 1968 and achieving fame first as a songwriter ("Urge for Going", "Chelsea Morning", "Both Sides, Now", "Woodstock") and then as a singer in her own right. Finally settling in Southern California, Mitchell played a key part in the folk rock movement then sweeping the musical landscape. Blue, her starkly personal 1971 album, is regarded as one of the strongest and most influential records of the time. Mitchell also had pop hits such as "Big Yellow Taxi", "Free Man in Paris", and "Help Me", the last two from 1974's best-selling Court and Spark. In 1975 Joni released "The Hissing of Summer Lawns" which can be seen as an artistic turning point, and the beginning of her unique blend of folk, jazz and rock. It was intended as a concept album of sorts, with the "concept" being the contrast being freedom and slavery, and the idea that wealth and status sometimes ironically place a great many constraints on people's behavior. Mitchell is also an accomplished visual artist. She has, through photography or painting, created the artwork for each of her albums, and has described herself as a "painter derailed by circumstance". A blunt critic of the music industry, Mitchell has stopped recording over the last several years, and now focuses mainly on her visual art, although she released a new album - Shine on 25th September 2007. Official website: http://www.jonimitchell.com User-contributed text is available under the Creative Commons By-SA License and may also be available under the GNU FDL.

Joni Mitchell has been mentioned in our news coverage

Below is a sample playlists for Joni Mitchell taken from spotify.

Do you promote/manage Joni Mitchell? Login to our free Promotion Centre to update these details.