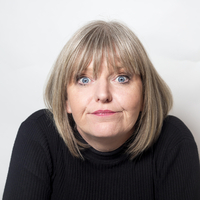 This charismatic comic performs in major comedy clubs across the UK and Europe where she is in as much demand for her compere abilities as she is for her comedy routine. Her natural stage presence alongside her "healthy neglect" attitude to children and life in general proves extremely popular amongst many and varied audiences including the armed forces where she remains as one of the few women to go to military bases to entertain the troops. She is regularly requested to support other comics on tour the likes of which have included Jenny Éclair, US Comic Louis Ramey, 4 poofs and a piano and most recently Tom Stade She is also a TV Warm up artist for studio based shows which have included the BBC1 sitcom "The Old Guys" and for series 1 and 2 of The Pappy’s new sitcom “ Badults” on BBC Three

Jojo Sutherland hasn't been mentioned in our news coverage

Do you promote/manage Jojo Sutherland? Login to our free Promotion Centre to update these details.