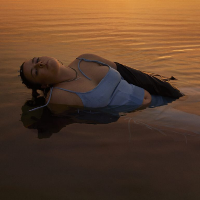 Get more information about Roskilde 2020 including festival tickets, news, reviews and lineups.

Jada has in a short time grown to be the most promising name on the Danish music scene and has captivated both Danish and foreign reviewers, media and fans with her personal and honest universe – a universe that breaks with the classic templates, and which can help push both borders, genres and trends. Jada has been on a long journey, where courage, trust and honesty have been among the crucial elements for the whole process. In January 2019 Jada won the P3 Talent Award at Denmark’s P3 Gold (equivalent of BBC Sound Of) and has since won a number of songwriting award and at the latest a grammy at Danish Music Awards. A great acknowledgment for an artist who most importantly dares to be herself and pursue both feelings, thoughts and dreams on her own way. In June 2019 Jada released her critically-acclaimed debutalbum ‘I Cry A Lot’ – an album which deals with her experiences from the past few years – love, doubts, insecurity, happiness, loneliness, trust and support.

Jada has been mentioned in our news coverage

Win tickets to see Justin Bieber at the MEN Arena!

Do you promote/manage Jada? Login to our free Promotion Centre to update these details.