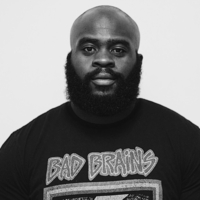 Gabriel Ebulue is a comedian, writer and podcaster from Peckham in South London, who can be seen live at comedy clubs across the country, from The Comedy Store to The Stand. He is the creator and host of the incredibly popular podcast: The Tree Track Podcast, which has featured the likes of Nish Kumar, Robin Ince, Hari Kondabolu, James Acaster, and Reggie Watts. Within a year of launching, the podcast has been featured in The Guardian, in iTunes' New and Noteworthy, and was also featured by Spotify. The show has been invited to be performed and recorded live at Latitude Festival, Green Man festival, Machynlleth Comedy Festival and many more. Gabriel has also been a recurring guest on BBC 6 Music and BBC 5 Live, and has been invited to moderate and host events at the Southbank pertaining to music and the culture surrounding it.

Gabriel Ebulue has been mentioned in our news coverage

Do you promote/manage Gabriel Ebulue? Login to our free Promotion Centre to update these details.