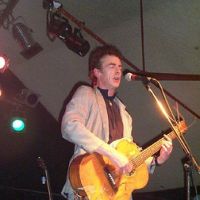 Tudor-Pole formed the band Tenpole Tudor in 1974, and eventually came to prominence after appearing in the film The Great Rock 'n' Roll Swindle as a possible replacement for Johnny Rotten in the Sex Pistols. He sang "Who Killed Bambi?", "The Great Rock 'n' Roll Swindle" and a cover version of "Rock Around The Clock" in the film and on the soundtrack.

Tenpole Tudor returned in 1980, signing to Stiff Records and releasing two successful albums, Eddie, Old Bob, Dick And Gary and Let the Four Winds Blow. They had three hit singles, one of them UK Top 10 hit "Swords Of A Thousand Men".

After parting ways with his band, he became a solo performer, and continues to play to audiences all over the country. His live acoustic shows tend to attract both aging punks and new fans attracted by his TV and film roles, and exhibit a mix of punk rock, country-western and pure rock 'n' roll. Each of his tunes pays tribute to a variety of stars. Standard punk anthems stand side by side with influences as diverse as Status Quo, Freddie Mercury, Tammy Wynette and Shakin' Stevens. As a result of new material written, his latest album `Made It This Far` was released in the summer of 2009.

Ed Tudor Pole has been mentioned in our news coverage

Plump DJS and More at Plug on Saturday 20th March

Do you promote/manage Ed Tudor Pole? Login to our free Promotion Centre to update these details.