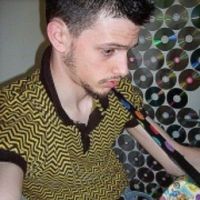 Daniel Richard Elson BA (hons) has a music degree, but doesnt like to shout about it. He publishes his own compositions on www.sibeliusmusic.com and plays with/leads various musical groups. As far as Dan is concerned one of his greatest acheivements is writing a song which a six year old enjoys enough to sing around the house. Even if he does substitute the correct lyrics for "Can I tell you about my special hair"?

He has achieved international fame (well other-national obscurity) with air-play on the radio in New Zealand (where technology still dictates that the whole family sit around the wireless every evening for the magical little men inside to sing to them). Hes also discovered that there is nothing which excites the average myspace user like monkey based rock n roll.

Here are the latest Dan Elson & The Rhythm Pixies mixes uploaded to Soundcloud.

Do you promote/manage Dan Elson & The Rhythm Pixies? Login to our free Promotion Centre to update these details.