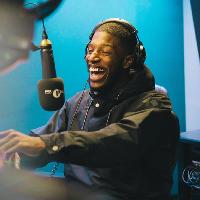 20 year old DJ/Presenter/Host from South London. Currently has a radio show on Reprezent Radio 107.3FM every Thursday 5-7PM. On the âDamnshaq Showâ He brings the freshest talent from all over the creative spectrum as well as playing the hottest music! Shaq has had the likes of Santan Dave, Reece King, Cadet, Shakka Da Badmon (PAQ) and many more. As well as being the first to press play on records from artists such as Abra Cadabra, Not3s, Tizzy & Brandz and K Trap before the bigger stations. Shaq also done guest mixes and have been interviewed on networks such as The BBC Asian Network, Radar Radio and This Is West Side and recently Deejayed and hosted at the BBC 1xtra Comedy Club event.

Damnshaq hasn't been mentioned in our news coverage

Here are the latest Damnshaq mixes uploaded to Soundcloud.

Do you promote/manage Damnshaq? Login to our free Promotion Centre to update these details.