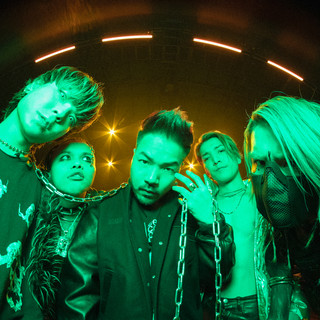 CROSSFAITH was formed in November of 2006 and the band currently consist of vocalist Kenta Koie, guitarist Kazuki Takemura, bassist Hiroki Ikegawa , drummer Tatsuya Amano and programmer Terufumi Tamano. The sound of the band in aggressive while introducing both strings and electronica sound effects to add catchy melody and unique structures of the songs. With this originality and the great live performance, it didn't take time for them be well known by people as they played with many big bands from oversea such as Machine Head, Hatebreed, Bleeding Though, August Burns Red, Greeley Estates, Pierce The Veil, Confide, Bless The Fall, Alesana to name a few. In April 2009, their 1st album "The Artificial theory for the Dramatic Beauty” was released in Japan from ZESTONE RECORDS and it has been a long seller album since then. This album sparked Japanese Screamo / Metalcore music industry which had never existed before. CROSSFAITH has been on endless tour and experienced many big festivals in Japan including the biggest Japanese metal festival, LOUD PARK in October 2009. Among the greats, they proudly performed in front of huge audience and it was the day that they launched a movement toward revolution of the new generation. In 2010, their unstoppable impetus became worldwide and their 1st album was released all over Europe from Gan-shin records and they are now making new album including the new song “Stars Faded In Slow Motion” . In 2011, CROSSFAITH is ready to go abroad and it would not take too long till their name gets well known to people all over the world.

Crossfaith has been mentioned in our news coverage

Below is a sample playlists for Crossfaith taken from spotify.

Do you promote/manage Crossfaith? Login to our free Promotion Centre to update these details.