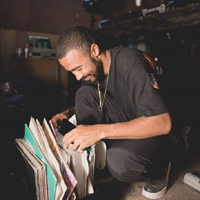 Get more information about Dimensions Festival 2023 including festival tickets, news, reviews and lineups.

London native, Christian AB was introduced to music from a very young age. His memories of hearing his father play records ranging from disco to acid house would inspire his curiosity. From this appreciation, he began to grow his collection to start his journey into becoming a DJ. This has taken Christian to clubs across the globe including his neighborhood of London, such as fabric, Space Ibiza, Club der Visionaere in Berlin, making stops in the US. His signature motion has been recognized in his sets and has granted him spots playing alongside Raresh and Praslea, Rhadoo, Onur Ozer, Mayaan Nidam, to name a few. In 2016, he released his first pair of EP's as Christian AB, the first one titled "Accelerated Growth" on NY label Nil, and has made an appearance on John Dimas' Elephant Moon label, titled "To The Moon Part I" alongside Giammarco Orsini. The same year he debuted his alias CAB92, to express his darker side, on the "Family Ties EP" on London in Transmission, followed to another Christian AB EP on the same label, which came out in 2017.

Christian AB has been mentioned in our news coverage

New Year, New Me: New year's resolutions and how to stick to them

Halloween History: What is the origin of Halloween?

Here are the latest Christian AB mixes uploaded to Soundcloud.

Do you promote/manage Christian AB? Login to our free Promotion Centre to update these details.