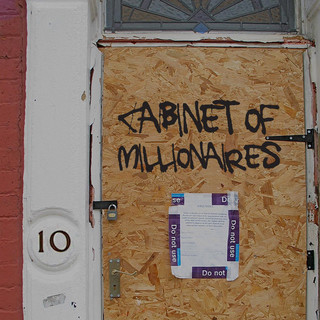 "reminiscent of the 70's Punk/Dub movement, the vocals bring a rallying cry against the menacing presence of austerity" BOTCHIT & SCARPER

"this is remarkable protest music. It is timely and with meaning – this is a voice the people need to hear, delivered in a format they can also enjoy" LOUDER THAN WAR

"Whether you call it agit-house, electro-rock or social disco, Cabinet Of Millionaires is an uncompromising project with a ballsy soulful political message and infectious grooves" JAMMERZINE (USA)

Cabinet of Millionaires hasn't been mentioned in our news coverage

Here are the latest Cabinet of Millionaires mixes uploaded to Soundcloud.