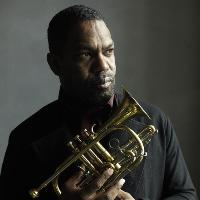 Byron Wallen is ‘one of the most innovative, exciting and original trumpet players alive’ - Jazzwise Magazine.

Widely recognised as a seminal figure in world jazz, he is constantly travelling the world recording, teaching and performing.

Byron Wallen (b. 1969) was raised in a musical family and as a child studied classical piano, euphonium, trumpet, flute and drums. The trumpet becoming his first choice instrument, he studied with Peter Ruderforth in London and with Jimmy Owens, Donald Byrd and Jon Faddis in New York in the mid to late 80s. In 1992, Wallen graduated from Sussex University with a degree in psychology, philosophy and mathematics.

Byron Wallen hasn't been mentioned in our news coverage

Below is a sample playlists for Byron Wallen taken from spotify.