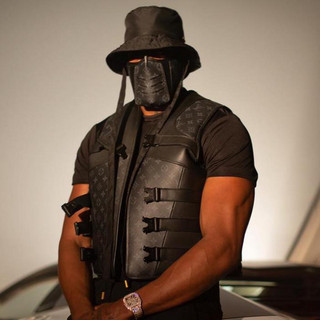 24 year old wordsmith Bugzy Malone is fast developing a reputation as one of the UKs brightest talents. Dubbed ‘The evil genius’, Bugzy has amassed a loyal fanbase through the heart felt lyrics and knock out delivery displayed in his latest mixtape ‘The Journal Of An Evil Genius.’

Attributing his unrivalled focus and work-rate to his former boxing past, Bugzy’s scrupulous attention to detail makes him the unique artist he is today. His 360 involvement in his videos (that he writes the treatments for), merchandise and image as well as music makes Bugzy the perfect fully rounded modern day artist. Bugzy Malone has some impressive stats for an unsigned artist.

He holds the accolade of being one of the most watched on the influential ‘Jdz Media’ Youtube channel with (420,000 + views). In 2012 saw Bugzy embark on a nationwide promo tour, amassing 900,000 YouTube views and receiving 10,000 downloads of the The Journal Of An Evil Genius mixtape. He also won the Manchester heat of Converse MC competition. 2015 looks set to be a breakthrough year for Bugzy Malone with support from SBTV, Jdz Media, P110 Media and many more. Link Up Tv recently posted ‘His JDZ Media Spitfire was the best freestyle of 2014, his Elite Session was fire too.’ with a new mixtape and EP in the pipeline it is without doubt the name Bugzy Malone is one you will be hearing a lot more of in years to come

Bugzy Malone has been mentioned in our news coverage

Weather for Wonderwood set to be a scorcher!

Wonderwood Festival to be SOLD OUT by tomorrow night!

Weather set to be a scorcher for Wonderwood Festival!

Below is a sample playlists for Bugzy Malone taken from spotify.

Do you promote/manage Bugzy Malone? Login to our free Promotion Centre to update these details.