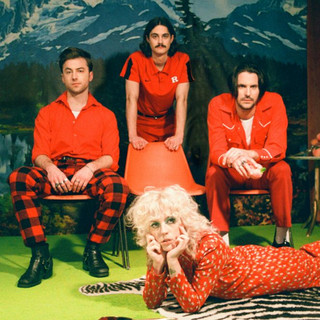 Chinnerys in Southend On Sea

Live At Leeds in the Park

Live At Leeds in the Park

Black Honey are fast becoming one of the most talked about guitar bands. Starting out shrouded in mystery the band let the music do the talking, there were no photos, only their TV themed artwork to accompany each track they released. Further adding to the intrigue, instead of issuing a standard press release the band invited fans to text them directly if they wanted to find out more.

After dreamy opener 'Sleep Forever', 60’s psychedelic ‘Teenager’ and grunge rock 'The Taste' the band revealed their debut EP with their final hook laden track ‘Bloodlust’ and the first photo of themselves. To celebrate the band played a packed out secret show in their hometown of Brighton. Initially only being known as ’the sweet taste of darkness’ Black Honey have gone on to become an unstoppable force and one of the most exciting bands of the year.

Black Honey has been mentioned in our news coverage

Here are the latest Black Honey mixes uploaded to Soundcloud.

Do you promote/manage Black Honey? Login to our free Promotion Centre to update these details.