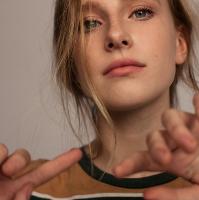 Billie Marten (the performance name of Isabella Sophie Tweddle. born 27 May 1999) is an English singer-songwriter and musician from Ripon in North Yorkshire. She first came to prominence at the age of twelve when a video on YouTube of her singing attracted thousands of views. She released her first EP at the age of fifteen in 2014, and her second EP a year later. At the end of 2015 she was nominated for the BBC Sound of 2016 award. Read more on Last.fm. User-contributed text is available under the Creative Commons By-SA License; additional terms may apply.

Billie Marten has been mentioned in our news coverage

More additions to the Sound City line up

Here are the latest Billie Marten mixes uploaded to Soundcloud.

Do you promote/manage Billie Marten? Login to our free Promotion Centre to update these details.