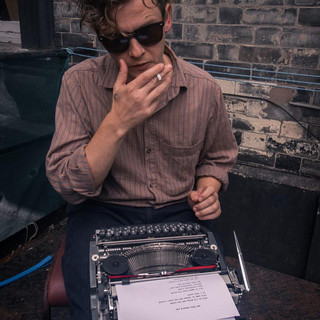 William Edward "Bill" Ryder-Jones (born 10 August 1983 in Warrington, Cheshire[1]) is an English singer-songwriter, musician and film score composer from West Kirby, Merseyside. He co-founded the band The Coral, together with James Skelly, Lee Southall, Paul Duffy, and Ian Skelly, playing as their lead guitarist from 1996 until 2008. He has since pursued a solo career, writing both his own albums and film scores, as well as producing records for other artists and appearing as a session musician. His debut album, If..., an instrumental concept album featuring the Royal Liverpool Philharmonic, serving as an imaginary film score for the Italo Calvino novel, If On A Winter's Night A Traveller..., was released in 2011 to critical acclaim.[2] His second album, A Bad Wind Blows in My Heart was released in 2013, again to positive reviews, while his third, West Kirby County Primary, will be released in November 2015. Both are departures from the orchestral nature of If..., the former featuring a more traditional collection of minimal folk songs, and the latter being a heavier, more alternative folk rock album.

Bill Ryder-Jones has been mentioned in our news coverage

The Coral: Six Of The Best

Below is a sample playlists for Bill Ryder-Jones taken from spotify.

Do you promote/manage Bill Ryder-Jones? Login to our free Promotion Centre to update these details.