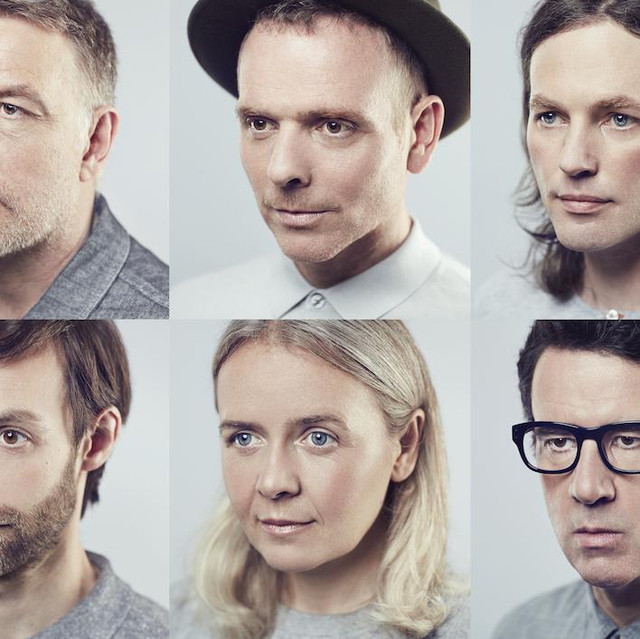 The Globe At Hay in Hay-on-Wye

Get more information about How The Light Gets In Festival 2020 including festival tickets, news, reviews and lineups.

Belle and Sebastian is a band from Glasgow. Led by guitarist/vocalist Stuart Murdoch, the seven-piece band has an intimate, majestic sound that is equal parts folk-rock and '60s pop. Murdoch has a gift not only for whimsy and surrealism, but also for odd, unsettling lyrical detail which keeps the songs grounded in a tangible reality. Based in Glasgow, Scotland, Belle and Sebastian released their first two albums in 1996: Tigermilk, recorded over three days, and If You're Feeling Sinister, recorded in a week, at the peak of the chamber pop movement. At first, some critics in Britain's music weeklies tied the band into the subgenre, yet the group was too pretty, too delicate, to bear that label. Through their first two years of public existence, the band shielded their personalities, submitting publicity photos featuring a girl, who was a friend of the band and reluctantly posing for photo shoots. Furthermore, they performed in odd venues, playing not only the standard coffeehouses and cafes, but also homes, church halls, and libraries. Prior to the formation of Belle and Sebastian, Murdoch suffered from a protracted battle with chronic fatigue syndrome, which forced him to drop out of school and spend seven years living in his parents' home crippled by his condition.Whilst in his parents home, Murdoch wrote a short story about a boy named Sebastian and a girl named Isabelle based on the names from Madame Cecile Aubery's children's book Belle et Sebastian. On New Year's Day 1996, Stuart attended a party at which he met a young singer and cellist named Isobel Campbell. In a letter to his brother Fraser, Murdoch explained how he was making a single for Stow college at the end of February. Murdoch opted to use the name Belle&Sebastian for the project because it was occupying him at the time. Murdoch took to songwriting as an escapism from the four walls surrounding him in his room and eventually recorded demos with bassist Stuart David whom he met at a government training programme called Beatbox. Murdoch quickly met a series of other musicians through social and musical circles in his hometown Glasgow and they agreed to help with the Stow project. The members he found for this initial lineup were Stevie Jackson (guitar), Mick Cooke (trumpet), Chris Geddes (keyboards), Stuart David (bass), Richard Colburn (drums), and Isobel Campbell (cello). The Stow College record was to be issued by Electric Honey, but it turned into a full album. The course instructor Alan Rankine determined that Murdoch had enough good material to record a full LP and could do so if they could get it all done in three days, studio time allotted for the single. Murdoch and his musicians rose to the challenge and recorded ten tracks putting the songs in order as they would appear on the record and mostly completing them in just a few takes. In May of 1996, Belle and Sebastian self-released their debut album, Tigermilk, on Electric Honey Records. Only 1,000 copies of the album, which was only pressed on vinyl, were released, but it unexpectedly became a sensation, earning terrific word of mouth throughout the UK. As a result, the band became slightly more than a school project â it became an actual band. If You're Feeling Sinister, released on the independent Jeepster label, followed in November of 1996. By the time the album was released in America on the EMI subsidiary The Enclave, it had earned considerable critical acclaim in the U.K. â not only from music weeklies, but from newspapers like The Sunday Times and magazines like The Face â and a large cult following; by some accounts, Tigermilk was being sold for as much as 75 pounds. Over the course of 1997, word of mouth continued to grow in America, even as the band pulled out of an American tour because The Enclave went bankrupt and closed. As the band cult continued to build in 1997, Belle and Sebastian released three EPs â Dog on Wheels (May), Lazy Line Painter Jane (July), and 3.. 6.. 9 Seconds of Light (October). Each subsequent EP placed higher on the indie charts and received great critical acclaim. Later in the year, violinist Sarah Martin became a member of the band. By the end of the year, the group finalized an American deal with Matador Records, issuing The Boy With The Arab Strap in September 1998. The following year saw the eagerly anticipated wide re-release of Tigermilk, the album that started it all. It was the biggest selling album but is unpopular with the group themselves. Following completion of 2000's Fold Your Hands Child, You Walk Like a Peasant, Stuart David left Belle and Sebastian to focus full-time on his solo project, Looper, being replaced by Bobby Kildea of V-Twin. In 2001, the group released two EPs â Jonathan David and I'm Waking Up to Us â and recorded the soundtrack for Todd Solondz's film Storytelling. Just before the soundtrack's release in spring 2002, Belle and Sebastian embarked on a comprehensive tour of the United States and Canada before returning to Europe for the summer festival season. Midway through the tour, Isobel Campbell left the band, citing the usual differences. Another major change that soon took place was the band leaving Jeepster and Matador to sign with Rough Trade, with their next record, late 2003's Dear Catastrophe Waitress, produced by the inimitable Trevor Horn (who also produced Frankie Goes to Hollywood, Yes, and scores of others). The record spawned the brilliant "Step Into My Office, Baby" and "I'm a Cuckoo" singles, the latter of which was the group's biggest U.K. hit, reaching number 14 in early 2004. After a long worldwide tour that found Belle and Sebastian reaching new levels of success, they retired to Scotland and began preparing for the recording of their seventh full length album, The Life Pursuit, released in 2006. Official website: www.belleandsebastian.com User-contributed text is available under the Creative Commons By-SA License and may also be available under the GNU FDL.

Belle and Sebastian has been mentioned in our news coverage

Five Must See Acts at Festival No. 6

Metronomy are final headliners for Festival No.6 Line Up

Below is a sample playlists for Belle and Sebastian taken from spotify.

Do you promote/manage Belle and Sebastian? Login to our free Promotion Centre to update these details.