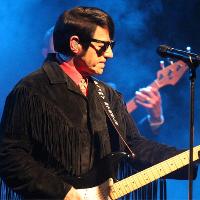 The one and only Barry Steele takes on the role of âThe Big O,â in The Roy Orbison StoryÂ® , He comes with great credentials and a genuine admiration for the Roy Orbison. Following his West End Debut at The Adelphi Theatre in The West End, Barry is set to put the rock back into âRoy Orbisonâ as he takes to the stage to commemorate this legend in âThe Roy Orbison Storyâ In Concert.

Get ready for an upbeat night of solid gold hits and contemporary genius as Barry Steele and a cast of musicians and singers, celebrate & commemorates the musical legacy of The Big O and his friends.

Barry is joined on stage by the sensational guest pianist Boogie Williams as they present original material written but never sung by Roy Orbison and showcase elements of the symphonic orchestration first heard on the Hologram tour.

Do you promote/manage Barry Steele and Friends - The Roy Orbison Story? Login to our free Promotion Centre to update these details.