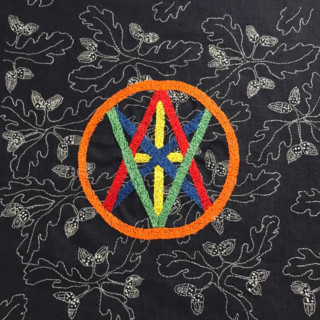 The Afro Celt Sound System is a musical group founded in 1995 that fuses modern dance rhythms (trip-hop, techno, etc.) with Celtic and African influences. It was formed by Grammy-nominated producer-guitarist Simon Emmerson, and is considered to be somewhat of a world music supergroup, often having a wide range of guest artists on their albums.

Their albums have been released through Peter Gabriel's Real World Records and they are also reportedly the best-selling band on the label, only exceeded in sales by Gabriel himself. Their striking live performances have often become the highlights of the WOMAD concert festivals. They signed a contract with Real World obliged to release five albums, of which the 2005 release Anatomic is the last. At this writing it is unclear what path the band will take in the future.

In 2003, they changed their name to the simpler Afrocelts; however, two of their latest albums, Pod, a compilation of new mixes of songs from the first four albums, and their fifth studio album Anatomic uses the long and familiar form. This decision is apparently informed by the fact that they are well-known as Afro Celt Sound System. Read more on Last.fm. User-contributed text is available under the Creative Commons By-SA License; additional terms may apply.

Afro Celt Sound System has been mentioned in our news coverage

Folk by the Oak announce full line up

Below is a sample playlists for Afro Celt Sound System taken from spotify.

Do you promote/manage Afro Celt Sound System? Login to our free Promotion Centre to update these details.