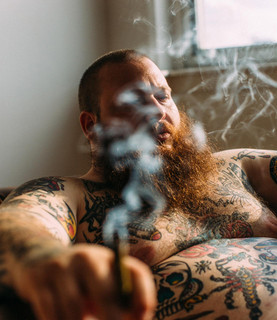 Action was born and raised in Flushing, Queens. He is of Albanian descent. He used to be a respected fire-flame gourmet chef in New York City, but gave up cooking for a rap career and still frequently raps about food in his songs. He has gained notoriety lyrically and stylistically resembling to rapper Ghostface Killah (who he collaborated with, along with friend, and fellow rapper Termanology on a song called "Meteor Hammer" on Wu-Tang Clan's 2011 album Legendary Weapons).

Action Bronson has been mentioned in our news coverage

Below is a sample playlists for Action Bronson taken from spotify.

Do you promote/manage Action Bronson? Login to our free Promotion Centre to update these details.