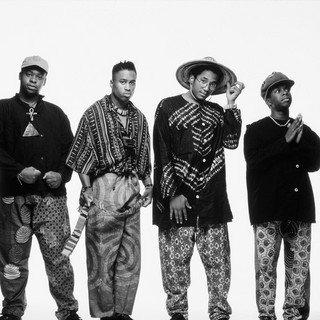 A Tribe Called Quest was an influential hip hop group of the 1990s, originally formed in Queens, New York City in 1985. The group is composed of Q-Tip, Phife Dawg, and DJ Ali Shaheed Muhammad. A fourth member, Jarobi White, was an intermittent collaborator appearing on their first album, but he left the group soon after, although he is mentioned as a 'sometimes' member on their third album liner notes. Along with De La Soul, the group was a central part of the Native Tongues Posse, and enjoyed the most commercial success out of all the groups to emerge from that collective. Q-Tip and Phife had grown up together in Queens, and met Muhammad in high school. The group's name was coined by The Jungle Brothers, whose members attended the same school. Soon after, the group began performing live and recording on a local label. The group became a part of the Native Tongues family, a Hip-Hop artist collective also consisting of the groups Jungle Brothers, De La Soul and Black Sheep. At the time of their inception, A Tribe Called Quest was unique within the hip-hop community for eschewing gangsta rap and macho posturing. Their lyrics focused on abstract and social issues such as the word "nigger", date rape and consumerism. Musically, the group helped pioneer the jazz-rap style (along with groups such as Gang Starr and De La Soul). They made their studio debut in 1990 with People's Instinctive Travels and the Paths of Rhythm. Though this album was critically acclaimed and lead to a strong fan following, their next album, The Low End Theory (1991) was a massive artistic success, appearing on several best of the year lists. It is considered one of the most important hip-hop albums to date. The Low End Theory was followed by the equally strong Midnight Marauders (1993), while Beats, Rhymes and Life (1996) and The Love Movement (1998) did not meet with as much success. Following The Love Movement, the group disbanded in 1998. Q-Tip and Phife Dawg went on to pursue solo careers while Muhammad co-founded the R&B group Lucy Pearl. Recently, there have been rumors of a reunion between the trio, ignited by a spate of group concert apperances around the US, but their most recent appearance was a Bumbershoot, a three-day music festival in Seattle in 2006 and there has been little news of an upcoming album, leading some to believe that the rumors may be unfounded. The official site is located at: http://www.atribecalledquest.com/ User-contributed text is available under the Creative Commons By-SA License and may also be available under the GNU FDL.

A Tribe Called Quest has been mentioned in our news coverage

Below is a sample playlists for A Tribe Called Quest taken from spotify.

Do you promote/manage A Tribe Called Quest? Login to our free Promotion Centre to update these details.