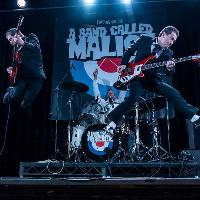 The Old Courts in Wigan

A Band Called Malice - Tribute to the Jam

A Band Called Malice (âMaliceâ) was formed in the early Summer of 2017 by Andy Coultas with the help of Jo Adams (of Their Music Rocks). Andy, a lifelong Jam fan who has over 12 years experience of recreating the âPaul Wellerâ role, was keen to create a band that he felt had all the essential elements of a Jam Tribute including high octane energy, angst, aggression, passion, vocals, musicianship and the look of The Jam. It took 6 months of planning and looking for the right musicians before the band played their debut gig in Sep 17..

Maliceâs rise in popularity in the tribute world has been nothing short of remarkable, in 2018 the band played over 70 gigs gaining a National Tribute Awards nomination, being officially endorsed by Lambretta Clothing of Carnaby Street, and having no less than a 1/4 of a million views on their video of the street performance at Carnaby Street in November 2017.

A Band Called Malice hasn't been mentioned in our news coverage

Do you promote/manage A Band Called Malice? Login to our free Promotion Centre to update these details.