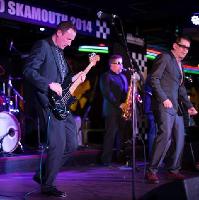 2 Rude were drawn together at the dawn of 2009 in a call to arms by the inimitable Mark Harry. This gathering brought together a crew of 7 first class musicians with a calibre that is second to none, and a combined number of gigs literally in the thousands.

The band have played with the likes of Roddy Byers of The Specials on several occasions and supported The Selecter and Bad Manners as their stature has grown.

Since the band have been touring the country playing their unique style of two toned inspired hits, they have played a string of sell out shows, headlined festivals and have left thousands of people breathless and shouting for more. 2 Rude have rightly claimed their title as one of the hottest live acts in the country.

2 Rude Ska hasn't been mentioned in our news coverage

Do you promote/manage 2 Rude Ska? Login to our free Promotion Centre to update these details.