In adherence to the release of her new album - Multimos, Bunty has curated a live show to promote the LP that'll dazzle minds throughout. The out of the ordinary show will take place at Bristol's The Trinity Centre on Friday 10th April.

Combining Special FX, bespoke visuals of VJ Metalune and boundless amounts of helium with the enlistment of performers Poppy Kay and Zoe Padley, an audience choir and the sublime beats of Dave The Machine, Bunty has curated a soiree like no other - teaser below.

The forward thinking Londoner, real name Kassia Zermon has been turning heads in recent times for her offbeat, experimental shows and crazed vocals that have been championed by the likes of David Rodigan and heralded on BBC Radio 6.

She has been placed in the same breathe as FKA Twigs and Tune-Yards for her avant pop sound that's spawned from techniques such as beat boxing and made up languages, taking her to Glastonbury and beyond.

For that inquisitive reasoning alone, this is one definitely worth checking out as we're certain that the album will be as dazzling as the party that precedes it. Grab your tickets here.

Here is the next upcoming event At The Trinity Centre, Bristol 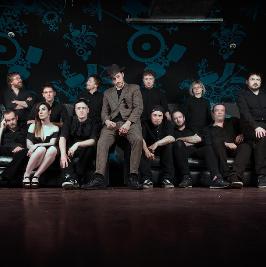 Dutty Moonshine Big Band will be returning to Bristol for their last tour show.