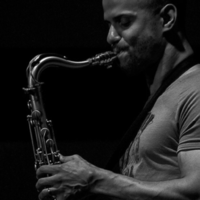 Originally formed in 1996, Sunchaser was a collaboration between Neil Robinson and Sam Edwards to produce and record a track for the acclaimed JTI album 'Scored one nil' They recorded a funky upbeat version of the Sportsnight theme tune which became one of the favourite tracks of the album and was played on BBC Radio 2 and Jazz FM on numerous occassions. Neil at the time was the long serving drummer for The James Taylor Quartet who continued to work with them until mid 2007 and since then has continued to session for many other well known artists including Tom Jones, The Sugababes, Mica Paris, Jamelia, Tony Hadleigh, David Mcalmont, Roy Ayers and The Sound Stylistics to name a few. Neil has also played at many major international Jazz festivals including Nice, New york, North Sea jazz festival in Holland , Rio, Singapore and Bankok and most recently a week at the Blue Note club in Tokyo. Sam is also a seasoned session musician, composer and arranger who is involved with many projects and is the keyboard player for The Real Thing. He has also worked with many artists including Rose Royce, Odyssey, JTQ , The Crissy Lee Quartet and The Tony Evans Orchestra and is a sort after session musician on the local Jazz scene. Move on 20 years and Neil and Sam, who have always had a passion for rare groove and funky soul jazz, decided to reform Sunchaser to become a live act to perform the music they love with adrenaline fuelled enthusiasum inspired by great Artists such as Blue Mitchel, Stanley Turrentine, Milt Jackson, Bobby Lyle, Grant green and Herbie Hancock. Andy Staples on Bass was an obvious choice for Neil and Sam to complete the Rhythm section. Having both worked with him on numerous occassions over the years his groove and feel sits perfectly for the style that the music evokes. Always busy and also a major force on the local Jazz scene, Andy has also worked with The Real Thing, Jason Rebello and Sean Maguire and is a member of Derek Nash's 'Picante' latin band. Long term friend, Zak Barrett, was then invited to complete the line up on Tenor saxophone. Zak's playing truly makes the whole project come alive. A highly experienced Jazz musician who organises and runs the well established jazz club at the Bassment in Chelmsford has worked alongside Mick Hucknall, Narada Michael waldon, The Foundations, Ashley Slater and Bernie Marsden. He has also had great success with his own band 'The Fellowship' playing internationally in the US and Europe.

Zak Barrett and Sunchaser hasn't been mentioned in our news coverage

Do you promote/manage Zak Barrett and Sunchaser? Login to our free Promotion Centre to update these details.