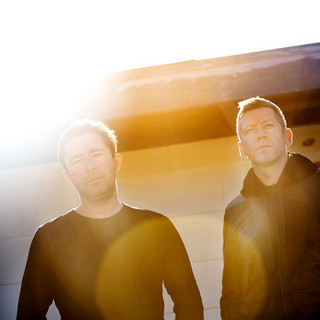 The brilliantly named Cinematic Orchestra is led by composer/programmer/multi-instrumentalist Jason Swinscoe, who formed his first group, Crabladder, in 1990 as an art student at Cardiff College. Crabladder's fusion of jazz and hardcore punk elements with experimental rhythms inspired Swinscoe to further explore the possibilities of sampling, and by the time of the group's demise in the mid-'90s, he was DJ'ing at various clubs and pirate radio stations in the U.K.

The music he recorded on his own at the time melded '60s and '70s jazz, orchestral soundtracks, rhythm loops, and live instrumentation into genre-defying compositions, as reflected on his contribution to Ninja Tune's 1997 Ninja Cuts 3 collection and his remixes of Ryuichi Sakamoto and Coldcut tracks. The Cinematic Orchestra built on this musical blueprint, letting a group of live musicians improvise over sampled percussion or basslines. The Orchestra included saxophonist/pianist Tom Chant, bassist Phil France, and drummer Daniel Howard, who also recorded the Channel One Suite and Diabolus EPs for Ninja Tune with Swinscoe.

The project's full-length debut, Motion, arrived in 1999 to great acclaim, which culminated in the Cinematic Orchestra's performance at the Directors' Guild Lifetime Achievement Award ceremony for Stanley Kubrick later that year in London. After the collection Remixes 1998-2000, their second album, Every Day, followed in 2002, with vocal features for Fontella Bass and Roots Manuva. Man with a Movie Camera, a 2003 release on CD and DVD, offered a 1999 film score Cinematic Orchestra had provided for the re-airing of a 1929 Soviet documentary, while four years later Ma Fleur was released. Live at the Royal Albert Hall arrived in spring 2008.

In 2011, the group curated a series of events at London's Barbican Centre where classic silent films were shown with new commissioned soundtracks. Highlights from the series were collected on the 2012 release The Cinematic Orchestra Presents: In Motion #1.

The Cinematic Orchestra has been mentioned in our news coverage

The Cinematic Orchestra live at 02 Apollo in Manchester review

End of year round up: Matt Jones

Below is a sample playlists for The Cinematic Orchestra taken from spotify.

Do you promote/manage The Cinematic Orchestra? Login to our free Promotion Centre to update these details.