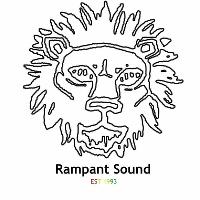 Glasgow's original heavyweight dub champions formed late 1992 early 1993. The original line-up included 2 Glaswegians and a Londoner Alan, Dave and Paul AKA Professor Collie, Chemical Engineer and Dr. Dub. Their weekly gig took place on a Wednesday night at UV (Under Venturer) the basement of the Cafe Bar Ventura which now resides as the 13th Note on King Street Glasgow. Despite their other residences at the Glasgow School of Art (upstairs), The Vic bar (downstairs), a stint at the Cathouse (when it was located on the Broomielaw!). UV remained their spiritual home and the weekly Wednesday nights always remained free which went hand in hand with their 'dub for all' policy and mantra.

Having to compete in Glasgow (a Techno/dance city) encouraged Rampant Sound to appeal to this crowd and developed an unsoundsytem type of playing records. They would mix n scratch much more than traditional sound systems, speed up many of the tunes and coined the phrase 'dubjockeys' to appeal to this techno bias audience. They introduced the siren box, echos chambers and many other haunting sounds (including a WWII air-raid siren) to accompanying the deep thumping bass rhythms which remains their calling card to this day.

They were the first in Glasgow to encourage the likes of Zion Train, Revolutionary Dub Warriors, Nick Raphael (Manasseh) and many others to venture north of the border and check out the Scottish reggae dub scene. At the same time Soundclash Republic were playing in the original 13th Note on Glassford St, Unity Reggae and Messenger Sound System (Edinburgh) were maybe the only outlets for Roots & Reggae music in the central belt. Some of the combined gigs with the other sounds are still well remembered to this day especially those nights at the Bongo Club Edinburgh with Steve Messenger.

Rampant Sound hasn't been mentioned in our news coverage

Here are the latest Rampant Sound mixes uploaded to Soundcloud.

Do you promote/manage Rampant Sound? Login to our free Promotion Centre to update these details.