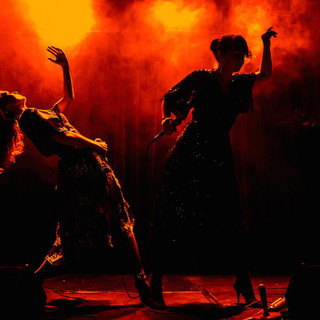 The Lemon Tree in Aberdeen

Three different groups have performed under the name Nouvelle Vague:

Nouvelle Vague (France) is a project created by French musicians Marc Collin and Olivier Libaux and a number of female singers, including Camille, Alexandra Pavlou of Spring and Suburbia, Mélanie Pain, Marina Céleste & Phoebe Killdeer of Phoebe Killdeer and the Short Straws. The group's albums consist in bossa nova fashioned covers of (primarily) new wave songs (hence the name "Nouvelle Vague"). The covers include songs by Dead Kennedys, The Smiths, Joy Division, Public Image Ltd., Depeche Mode and Bauhaus. Each singer only performed songs they were not previously familiar with, to ensure that each cover would have an individual interpretation.

With a name that means "new wave" in English and "nova onda" in Portuguese (which is the meaning for "bossa nova", a new music "fashion"), Nouvelle Vague's moniker neatly sums up the group's concept: remaking classic new wave singles with a Brazilian pop twist. Libaux played with various French pop bands during the '90s and began working with Collin in 1998. For Nouvelle Vague, Collin and Libaux recruited half a dozen French and Brazilian vocalists who were unfamiliar with the original versions of songs like Joy Division's "Love Will Tear Us Apart" and XTC's "Making Plans For Nigel" to ensure that their renditions had their own identity. Nouvelle Vague was released in Europe in 2004 and received U.S. distribution in spring 2005, which coincided with tour dates in locales as far-flung as Shanghai, New York, Los Angeles, and Rio de Janeiro. Nouvelle Vague's second album, Bande à Part, arrived in summer 2006. The following year, the team returned with Coming Home, a collection of songs from films given the Nouvelle Vague treatment. Nouvelle Vague Presents New Wave, a collection of covers by new wave artists, also arrived in 2007.

Nouvelle Vague has been mentioned in our news coverage

Crammed Discs at the East of Culture- Different Sounds 2017

Morcheeba to headline "grown up festival"

Below is a sample playlists for Nouvelle Vague taken from spotify.

Do you promote/manage Nouvelle Vague? Login to our free Promotion Centre to update these details.