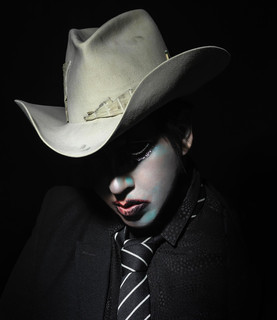 Marilyn Manson is a Fort Lauderdale, Florida, United States-formed rock band led by the singer also named Marilyn Manson (born Brian Hugh Warner on January 5, 1969). Warner chose the name, a combination of Marilyn Monroe and Charles Manson, to illustrate what he considered to be the extreme dualism of late 20th century American culture. The stage names of each band member were originally created by combining the first name of an iconic female sex symbol and the last name of an iconic mass murderer or serial killer, though this naming convention has not extended to new band members after the mid-90s. Along with Rob Zombie and Alice Cooper he is currently one of the main performers of the shock rock genre.

Formed in 1989 in Fort Lauderdale, Florida, as Marilyn Manson & The Spooky Kids, the band's uniquely theatrical performances gathered a local cult following that developed over time into a worldwide fanbase. By the late 1990s the band was considered one of modern music's most widely-known and controversial acts; this was due, in large part, to Manson's then-frequent clashes with religious and political groups. Manson's lyrics often receive criticism for their anti-religious sentiment and for references to sex, drugs, and violence (albeit typically in the abstract as opposed to any specific depiction). The band's music and performances have frequently been called offensive and obscene. Protests and petitions have sometimes led to the group being banned from performing.

Marilyn Manson has been mentioned in our news coverage

Space interview: Give Me Your Future

Below is a sample playlists for Marilyn Manson taken from spotify.

Do you promote/manage Marilyn Manson? Login to our free Promotion Centre to update these details.