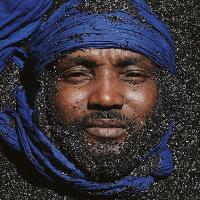 When the Nigerien singer/guitarist Aboubacar 'Anana' Harouna arrived in Brussels in 2005, he was inspired by the city to bring his superb desert blues up to date. He discovered a city of blends, with a huge cultural diversity, and used it to add a touch of reggae, a hint of Afrobeat, and even some salsa. With musicians that come from Mauritania, Ghana, France, Mali and Algeria, Kel Assouf is a good reflection of our large European cities: pluri-cultural and full of new musical fusions that carry a message of peace, union and solidarity between people and cultures.

The influences only enhance music that remained rooted in the Sahara. Kel Assouf – which means 'son of the desert', 'son of the infinite' and 'son of solitude' – called their first album 'Tin Hinana', after an ancient Touareg queen, to symbolise the culture they would like to revitalise and whose story he would like to see written in Tifinagh, the writing of the Touaregs. "The guitar was an important instrument during the Touareg revolution, it helped us stand up for our rights. Now it must serve to make people aware about building our region, to get economic and cultural development of our people on its way." Read more on Last.fm. User-contributed text is available under the Creative Commons By-SA License; additional terms may apply.

Kel Assouf has been mentioned in our news coverage

Do you promote/manage Kel Assouf? Login to our free Promotion Centre to update these details.