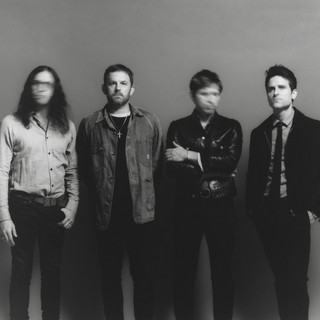 When Kings of Leon released their third album Because Of The Times in April 2007, Entertainment Weekly called it their “crowning achievement,” while Rolling Stone wondered: “How good can the Kings of Leon get? They’ve already gone further than anybody could have guessed.”

Coming as it did on the heels of 2003’s rowdy Youth and Young Manhood and 2005’s brawny Aha Shake Heartbreak, the expansive Because of The Times was indeed a pivotal and game-changing album. It led the Followills — Tennessee-bred Caleb, Nathan, and Jared, and their cousin Matthew — to astonishing success around the world. In the U.S., the band has sold out New York City’s fabled Radio City Music Hall and The Greek Theatre in Hollywood. In the U.K., Kings of Leon headlined this summer’s legendary Glastonbury Festival, as well as the Oxygen Festival in Ireland, and sold out their upcoming December show at London’s 20,000-seat 02 Arena (where Led Zeppelin held its reunion concert) in less than an hour.

But if critics thought that Because of The Times was the work of a band “at the peak of its powers” (as the Los Angeles Times put it), they may want to reconsider that assessment after hearing Kings of Leon’s new album Only By The Night, due from RCA Records on September 23rd. Only By The Night picks up where Because of The Times left off, continuing Kings of Leon’s shape-shifting evolution and cementing their status as a world-class rock band.

“After three records and touring for five years straight, we knew what we were capable of,” says the band’s drummer Nathan, “we just had to put our money where our mouths were. We had to take it to the next level. You always want your next record to be better than your last.” Adds frontman and lyricist Caleb: “There’s never a time that we’ll make a record and won’t attempt to do something better than what came before.”

With its stunning melodies, ringing guitars, and razor-sharp grooves, Only By The Night delivers on the promise Kings of Leon have shown throughout their career. From the desolate atmospherics of the opening track “Closer” (which Caleb says is about a lovesick vampire) to the emotional intensity of the closing ballad “Cold Desert” (“about a man at the end of his rope who picks himself back up”), Only By The Night is all heart from start to finish.

Album highlights include the insistently chugging first single “Sex on Fire” (“there’s always been an element of sex in our music, so I thought I’d just wrap it all up in one song and be done with the sex for the rest of the record,” Caleb jokes), the throbbing, propulsive “Crawl” (about relationships of all kinds and taking them for granted), and the sonically sweeping “Use Somebody,” which Caleb wrote while feeling lonely on the road. “It’s about being far from home.” Then there’s the soaring uplift of “Manhattan,” which is partly about dancing and enjoying life and partly about the struggles of Native Americans. “’Manhattan’ is actually a Native American word that means ‘island of many hills,’” says Caleb, who adds that his family has Native American blood. Finally there’s the driving, forceful “Notion,” which finds the singer pushing back against anyone who says anything against anyone in his band.

Kings Of Leon has been mentioned in our news coverage

Here are the latest Kings Of Leon mixes uploaded to Soundcloud.

Do you promote/manage Kings Of Leon? Login to our free Promotion Centre to update these details.