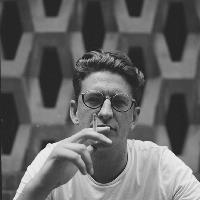 As one of the UK’s best-loved selectors Skream has enjoyed the kind of consistency most DJs and producers can only dream of. His passion for collecting and playing music is unrelenting; disco, house, techno and everything in between… it runs deep into his core and he lives it every single day. Still only in his early thirties, Skream has achieved more in the last 15 years than most people do in a lifetime, yet his hunger and enthusiasm is akin to that of a man who is only just getting started…

Skream’s history is well documented; a love affair with music that was triggered by his older brother, Hijak. DJing since he was 11. Making music at 15 and one of the key innovators at the birth of dubstep. All before he’d left his teens. With his place in UK music history already assured, he could have easily kicked back and taken advantage of his legendary status. Instead he opted to make the transition to disco, house and techno, leaving the dubstep world to do his own thing, in typical Skream style.

Tracks like ‘Rollercoaster’ (ft. Sam Frank) and his remixes of Duke Dumont ‘Need You’ and ‘Infinity’ by Infinity Ink helped introduce the world to Skream’s shift in styles, while his mix output from 2013, cemented the change in direction seamlessly blending a variety of 4x4 styles across all of his tracks. Parallel to these pivotal releases he also showcased his eclectic tastes at his Skreamizm parties across the UK and the rest of the world, and so a new chapter began.

Skream can be seen performing at many festivals throughout the year including, Love Saves The Day, Bassfest and El Dorado Festival

Skream has been mentioned in our news coverage

Below is a sample playlists for Skream taken from spotify.

Do you promote/manage Skream? Login to our free Promotion Centre to update these details.