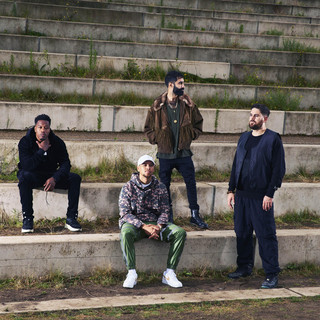 Emerging from London's thriving underground is Rudimental, a hard to classify collection of minds that have been taking the dance music world by storm in recent years.

With their anthemic releases being ubiquitous around the UK, Rudimental have taken over the UK charts with significant force. Their appearance for BBC Radio One's Hackney Weekender saw their second ever live show become the most shared performance of the entire festival, and their carnival-esque live shows have continued to dazzle festivals around the country.

Combining so called traditional songwriting skills and putting them into a drum 'n' bass, urban context full of soul have given them a unique organic sound that has crossed over from the underground into mainstream consciousness with dizzying aplomb. Inspired by everything from old mix tapes to pirate radio stations, Rudimental have defined for themselves a sound very much their own.

Each member of the group brings a different musical background to the table, from hip hop (Kesi) to jazz and blues (Hammond), UK garage (Leon) to guitar music (Amir). Amir himself, talking about the unique musical sound of the band said Amir says of the Rudimental sound: "The unifying thing is the soul influence and the bass influence, those two things are always there"

Writing as a group and pulling from one another's strengths, the resulting sound-clash style is always filled with energy, heavy basslines, live instruments, and contagious hooks that both reflects their London background whilst giving them universal appeal in the process.

"What unites us all really is our love of soulfulness on the dance floor. We want people to dance and to feel something". This philosophy has paid dividends, as the four of the musically passionate innovators have done the impossible and combined their skills to reach the hearts of music lovers everywhere.

Rudimental has been mentioned in our news coverage

Here are the latest Rudimental mixes uploaded to Soundcloud.

Do you promote/manage Rudimental? Login to our free Promotion Centre to update these details.