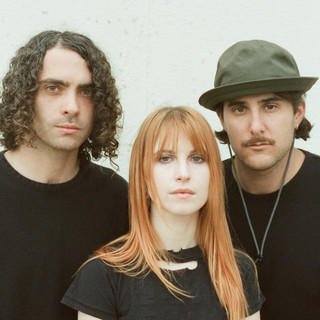 Paramore is an American pop rock band that formed in Franklin, Tennessee in 2004. Members are Hayley Williams (lead vocals/keyboards), Josh Farro (lead guitar/backing vocals), Jeremy Davis (bass guitar), Zac Farro (drums), and Taylor York (rhythm guitar). The group released their debut album All We Know Is Falling in 2005, and their second album, Riot! in 2007, which was certified Platinum in the US and Gold in the UK, Ireland and New Zealand. Brand New Eyes, Paramore's third album, was released on September 29, 2009. Brand New Eyes is the band's highest charting album to date.

Paramore has been mentioned in our news coverage

Below is a sample playlists for Paramore taken from spotify.

Do you promote/manage Paramore? Login to our free Promotion Centre to update these details.