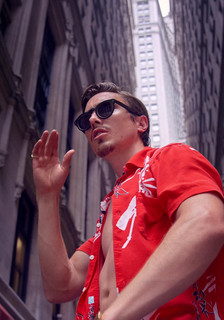 Here you will learn everything you need to know about Marc Rebillet, aka Marc "Loop Daddy" Rebillet, aka Marc â€œI paid you to be a DJ for my wedding, not to waste the atmosphere with your shitsâ€ Rebillet, an artist, actor, musician, composer, humorist, philosopher and phone psychotherapist who explores the realms of the looping art through such mainstream themes as rape, buttholes, or herpes.

Marc was spiritually born around 2007 in an iPhone waiting line. Hearing a voice in the bathroom calling him on a mission, he went there and found fortune. He then launched his big plan for ruling the world, based on pooping on everything. He failed, but his aspirations remain intact.

Taking advantage of the huge popularity he immediately reached on YouTube (14 subscribers in less than a day), he bought a BOSS RC-505 loop station. To cook rice? No, asshole, to make loops. Some may ask: "Why looping?" and Marc would probably answer: "I don't know man, I just do what I like". But don't be fooled, we all know the reason is that he's just a lazy dumbass.

Despite what you might expect, he learned to play the piano at 5. Immediately noticed by his teachers, he became the boy we all know as the "Mozart of Dallas" in no time, composing his best masterpieces before reaching age 12. He then fell sick, ravaged by an inexplicable melancholy.

Desperate, his parents tried everything to cure him. From therapists to beating the shit out of him, including his uncle Jimmy trying to help with "special bedroom sessions", nothing seemed to lead to recovery. He got worse.

Marc Rebillet has been mentioned in our news coverage

Below is a sample playlists for Marc Rebillet taken from spotify.

Do you promote/manage Marc Rebillet? Login to our free Promotion Centre to update these details.